One of the funniest, yet ironically tragic, video clips that circulated on the Internet some years ago showed two well-dressed business people entering the lobby of a modern building. They stepped onto an escalator to catch a ride to the next level up. Midway between floors, the escalator suddenly stopped, as if someone had pulled the plug. At first, mild irritation showed on the faces of the two who were riding the escalator. That was soon replaced by foot tapping, finger thrumming and repeated glances at wristwatches as the frustration built. Then came the shouts for help. The man yelled into the empty echo of the vacant lobby, “Hey, someone help us. We’re stuck here.” The woman joined in the effort to vocally summon help. But there they stood, tapping their feet, thrumming their fingers, helplessly waiting for someone to come along and lift them the rest of the way to their destination. As time went on and the escalator failed to start again, and no one came to assist them, their shouts for help became more and more demanding, but neither was willing to simply pick up their feet and walk to the next level.

It was hilarious as a political video clip aimed at pointing fingers at one of the parties. But beyond the humor it was tragic because it perfectly displayed a condition that is all too real in today’s world where, when we get stuck, we expect someone to come along and bail us out. We expect it! We’re entitled to it — at least that’s the concept that’s promoted by organizations (including the government) that profit from keeping people dependent.

The truth is that if I can keep you dependent on me to solve your problems, then I can either tap into your wallet directly or into the government’s wallet (which is really your wallet) to keep me in the lucrative “rescue” business. I won’t even start to go into the vast variety of “entitlement/rescue” operations that are at work in our society, each selling the fable that you are incapable of making it on your own without their help. But just look around and you’ll be amazed at how helpless these organizations want you to feel, so you’ll be intensely grateful to them for saving you from everything; never mind the fact that what they’re really accomplishing is the destruction of the human spirit of independence and self-reliance.

Now, I’m not saying that some people don’t sometimes legitimately need outside help. What I am saying is that, to the degree that we are capable, we need to be willing to walk up the escalator on our own when the thing breaks down, rather than just stand there and scream for somebody to come and carry us the rest of the way.

My message here isn’t about what you “deserve” or what you’re “entitled” to in life. It’s about how to take personal responsibility for your own welfare and then reach out and help the next person. It’s about reclaiming your human spirit, discovering what you are capable of, and not waiting around for someone to come along and convince you to remain incompetent, impotent, unqualified, powerless, helpless. It’s about the eternal truth that was spoken by a great American president who said, “Ask not what your country can do for you … ask what you can do for your country.” And the beginning of that is to ask what you can do for yourself.

Doing what you can for yourself does not mean that you isolate yourself from the rest of society, become a loner, a recluse, a stubborn person who wouldn’t accept help from someone else if his life depended on it. I’ve known people like that — they get in a jam, you show up to lend a hand and they wave you off as if you’re some kind of irritating gnat. They’re grumpy, bitter, and resistant to any offers of assistance. Well, that’s not what I’m talking about when I say that we all need become responsible for our own welfare.

Actually, it’s just the opposite. Taking personal responsibility extends to how you interact with the community around you. Assuming you live in a free and safe society, you benefit greatly by the strength of that society — it helps keep you safe and offers a type of communal strength that is not available when you’re on your own, having to come up with your own water supply for every drink you take, your own food supply for every bite you eat, constantly having to watch your back lest the Barbarians ambush you to steal everything you’ve got. So, recognizing that the community, the neighborhood, or even just the family provides a lot of comfort and security, you own something in return. If you go off the deep end and isolate yourself, turning your back on everyone else, you violate the core concept of personal responsibility. Because you are personally responsible to contribute to the community.

Don’t misunderstand the concept of personal responsibility and self-reliance. Part of your responsibility is to be willing to help yourself to the degree possible. And don’t shortchange yourself here — don’t set such minimal standards with low goals and ideals that it takes no effort to reach them. Do what you can for yourself, and then look around and see whom else you might be able to help. That’s what it means to take personal responsibility.

If you think you are incapable, consider the true story about Rudy Garcia-Tolson. Born with multiple physical problems, including a club foot, deformed hands, a cleft lip and palate, by the time Rudy was five years old he had already endured 15 surgeries. At that young age, he was forced to face the choice of spending the rest of his life in a wheelchair or amputation of both legs and then trying to learn to walk on prosthetic legs. Rudy, at a time when most kids never make a decision more daunting than choosing between Frosted Flakes or Fruit Loops, chose to have his legs amputated.

Of course his parents and doctors were involved in the decision, but they were his legs, and ultimately it was his choice to make. It’s called taking personal responsibility. 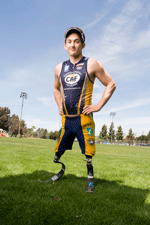 So, what did Rudy do, now that both legs had been sawed off through the knee? He began swimming, then running, then cycling. By age 15, he had won a Paralympics Games gold medal. In 2007, he broke his own world record … twice. He competes in triathlons (swimming, cycling and running), was the first bilateral amputee to complete an Ironman 70.3 triathlon, and has set a goal to complete the grueling Ironman World Championship Triathlon in Hawaii.

During his early life, Rudy was honored with the Arete Courage in Sports Award, the Spirit of de Vinci Award, and many others. He was chosen to carry an Olympic torch, and People Magazine named him among 20 teens who will change the world.

And it all started with what most people would consider a disability (read: inability). Rudy, however, doesn’t dwell on inability; he thinks in terms of ability. What he can do, not what he cannot. What he has left, not what he lost. “I don’t ever really think about the fact that I’m an amputee,” Rudy says.

I call that heroic personal responsibility.