Although lightning can strike at any time of year, even during a snowstorm, summer is the season when it poses the greatest danger for people.
That's because this is the time of year when we're outside hiking, fishing, boating, playing golf and placing ourselves in an environment where  lightning can be a problem.
Dr. Mercola (www.mercola.com) presented an excellent article about lightning strike on his website, and gave permission to share it.

From 2003 to 2012, nearly 350 people died from being struck by lightning in the US.  Many more are struck by lightning and survive, as only about 10 percent of lighting-strike victims are killed (though many do suffer from serious long-term effects).
Contrary to popular belief, what you do during a lightning strike can make all the difference in the outcome, helping you to survive and potentially suffer only minor injuries.
You might think this will never happen to you, but when you consider that the Earth is struck by more than 100 lightning bolts every second, it doesn't sound so far-fetched, does it? If you live in the US, you have a 1 in 3,000 chance of being struck by lightning in your lifetime. Knowing what to do if it happens can save your life.

How to Survive a Lightning Strike 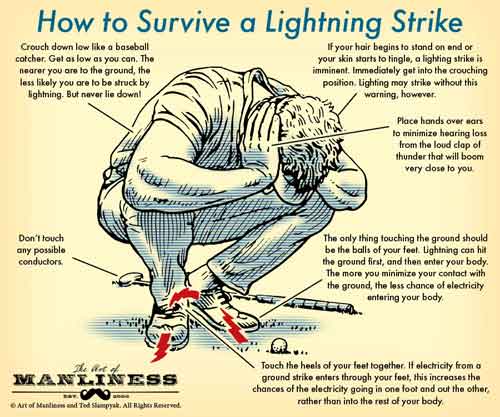 The illustration above, done by Ted Slampyak for The Art of Manliness, shows the best position to assume if you're caught in a storm. In a nutshell, here's what you should know:

If You Can Make It to Your Car, Go There

Have you ever heard of a Faraday suit or Faraday cage? This is what some electrical linemen wear so they can work on live, high-voltage power lines without being electrocuted.
Named after Michael Faraday, a scientist who invented them in the 1800s, the suit or cage is made of a mesh metal or other conducting material, which allows the electrical current to pass through the conducting material without reaching whatever is inside. It moves the current around you rather than through you.
Your car is actually a Faraday cage, which is why you're safe inside one if lightning strikes (it's not actually the rubber tires that protect you, as often believed, it's the effect of the Faraday cage).
So, if you can make it to your vehicle, do. If not, you'll want to crouch low to the ground on the balls of your feet with your heels touching, but avoid lying on the ground, as described above.

According to an analysis by the National Weather Service, in many lightning-strike deaths, the victims were either headed to safety, or just steps away from safety, when the fatal strike occurred, so if you think a storm is approaching, don't wait to seek shelter! Many wait far too long, believing the storm is too far away to be a threat. As reported by National Geographic:

Furthermore, lightning is not only a concern during a thunderstorm. It can also strike during other weather events, including:
Generally speaking, if you know a storm is approaching, don't risk it. Seek shelter immediately. You can also use the 30-30 rule when deciding if you need to take cover. When you see lightning, begin counting until you hear thunder. If the time is 30 seconds or less, it means the storm is within six miles and you should move to safety immediately.  Even after the sun comes out, you should wait at least 30 minutes after the last clap of thunder before heading back outside.

The Worst Places to Go in a Thunderstorm

If you're caught in a thunderstorm, resist the temptation to hide under a tree. Trees are typically the tallest objects around, making them perfect targets for lightning and one of the worst places to seek shelter. If you're near one, the lightning can jump over to you and follow your body on its way to the ground.
Rivaling trees as the worst place to go in a thunderstorm would be going near (or in) any type of water, as water is an efficient conductor of electricity (and if you're swimming, you'll also be the tallest object around). You also can't depend on wooden, vinyl, or metal sheds or structures to protect you, unless they're specifically designed to be lightning-safe (and most are not).
Small shelters common to picnic sites, parks, golf courses, and athletic fields will not typically protect you from lightning because they have no mechanism to conduct the electrical current to the ground (such as plumbing or wiring).
Toward that end, if you're indoors be aware that if lightning strikes, it can travel through electrical and telephone wires, which is why you should avoid contact with electrical appliances, plumbing (don't take a shower, do laundry, wash dishes, or even wash your hands), and landline phones (phone use is a leading cause of indoor lightning injuries).

Where Are You Most Likely to Be Struck by Lightning?

Contrary to popular belief, it's not on the golf course, although it is while you're engaged in leisure activities. According to a National Weather Service analysis, two-thirds of lightning deaths occur in people enjoying outdoor leisure activities. As you might suspect, the deaths spiked during the summer months of June, July, and August, and on Saturdays and Sundays, when people are most likely to be outdoors. Interestingly, golf didn't even make the top 10 list of leisure activities associated with the most lightning deaths (it was #12). The top locations revealed by the analysis were:

What to Do If You're Struck by Lightning

Most lightning strikes are not fatal, but that doesn't mean they're without consequence. Lightning can injure your nervous system, leading to brain and nerve injuries. It can also lead to cardiac arrest from the electrical shock (and this is typically the cause of death in fatal lightning strikes). Rarely, serious burns may occur. If you're near someone who has been struck by lightning and they become unresponsive, it is safe to help them (there is no risk of being electrocuted if you touch them).
After calling for emergency help, administering CPR, or CCR, may keep them alive until help arrives. Aside from cardiac arrest, a lightning strike can lead to short-term symptoms such as muscle soreness, headache, nausea, upset stomach, confusion, mental slowness or fogginess, dizziness, and balance problems. In the longer term, other symptoms may also emerge, some of which may be delayed, including:
In addition to finding a knowledgeable health care provider to treat and help resolve your physical symptoms, the Lightning Strike and Electric Shock Survivors, International (LSESSI) support group can offer you and your family emotional support.

Posted by Rich Johnson: at 7:24 AM No comments:

If you were camping in grizzly bear country, it wouldn’t be wise to encourage the bears to come into your camp looking for their next meal.

How would that happen?

The rule in camp is that you don’t leave food and garbage lying around in the open, because that will attract predators such as bears.

So, to keep from doing that, all food and garbage needs to be stored in bear-proof containers, or strung up on bear wires high above the ground where the bears can’t get to it. But in any case, you keep the containers or bear wires a good distance away from your camp, so even if the bears find those things at least they won’t be in your camp.

So that’s how it goes in the wilderness. But what’s the correlation between this and survival in the city?

In the city, there are predators. And just as surely as a grizzly bear goes on the prowl looking for its next meal, so do the predators in the city.

You read about them every day in the headlines. Homes are invaded. Women and children are abducted. People are taken hostage or murdered.

Survival in the city is a much bigger problem than survival in the wilderness.So, how do you keep from encouraging the city predators from coming into your camp — your home, your life?

One strategy is to stop advertising. Stop displaying publicly any details about yourself or your family

One of the ways people publicly advertise details about their family is with bumper stickers. You’ve seen them — the cute little window stickers that show stick figures of a dad, mom, children and even the family pet. That immediately tells a predator that there are children who could be abducted and held for ransom — or worse.

Or the bumper sticker proudly proclaiming that you have an honor student that attends a particular school. Or that you are members of a particular country club or fitness center.

If you have parking passes, don’t stick them permanently to the vehicle, but attach them to a bit of card stock that you can place on your dashboard when needed, and then hidden in the glove compartment when not needed.

Another huge problem is social media. People who post their travel plans, vacation photos and comments, or even just idle chatter about the day’s events are, in essence, ringing the dinner bell for the grizzly bear. Don’t use Twitter and Facebook and other such communication technologies to advertise to the world what your plans are.

Keep your personal life private. Use your vehicle for transportation, not as a billboard to advertise details about your life and your family.

In the wilderness, you have to understand the nature of the grizzly and then take the proper steps to stay alive. In civilization, you have to do the same thing with city predators.

Posted by Rich Johnson: at 8:27 AM No comments: