People interested in survival often talk about living "off the grid." That means living without outside support by utility companies, municipal water systems, etc.

Depending on advance preparation, life off the grid would range from living caveman style to living like Little House on The Prairie. If you're doing it voluntarily, that's one thing. But if life off the grid is suddenly forced upon you, that's an entirely different situation.

In an escalating scale of life off the grid conditions, the situation would look like this: No electricity (heating, refrigeration, cooking, lights). No running water. No toilet facilities. No communication devices (radio, TV, phone, computer). No transportation (gas stations unable to pump fuel). No commercially available food supply (stores closed due to no electricity and no transportation). No pharmaceuticals. No hospitals. No police and fire departments.

In a worst-case scenario, after a short time you would be pretty much on your own.

But assuming you're not anticipating a volunteer life off the grid … should you be concerned about any of this?

Well, if we can believe the leader of the National Security Agency (NSA), maybe we all need to start taking a closer look at our own personal preparation for living off the grid. In a recent meeting of the House Intelligence Committee, Admiral Michael Rogers, the director of the NSA and commander of the U.S. Cyber Command, told lawmakers that he believes China (and one or two other countries) have the ability to launch a cyber attack that could disable the electric grid in the U.S.

Further, Rogers stated that if the U.S. remains on the defensive, it would be what he called "a losing strategy." He went on to describe the threat as "so real."

Rumors about the disastrous impact of a cyber attack have circulated freely in the past, but never before has such a threat been publicly confirmed by the nation's head of national security.

At the hearing, Rogers confirmed that U.S. adversaries perform electronic "reconnaissance," on a regular basis so they can be in a position to attack the industrial control systems that run everything from chemical facilities to water treatment plants.

This suggests that it's time to take stock of our own personal preparation to survive off the grid. If the country is hit, there will be general chaos at all levels. There won't be anybody coming around to your neighborhood offering to keep you warm, to cook your food, to flush your toilet, or to calm your fears.

It's time to ask yourself the "what if" questions about how you would carry on with your personal survival needs if the grid suddenly ceased to exist.
Posted by Rich Johnson: at 10:29 AM No comments: 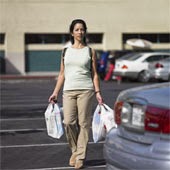 The man came out of nowhere, grabbed Carlesha Freeland-Gaither, and dragged her into his car. She'd been kidnapped.

It's the kind of story that happens all too often, sometimes in broad daylight and in public places. Most of the victims are women, sometimes grabbed from a parking lot and dragged into a vehicle adjacent to the victim's car. And most of the time the victim ends up dead.

But this time there was a happy outcome — Carlesha was found alive, and her kidnapper was taken into custody. So we should take a look at what Carlesha did that helped her survive.

A spokesman from the Philadelphia police department reported that Carlesha's fighting spirit was probably what kept her alive. "My understanding is, even after she was in the car and bound, she continued to struggle with this guy."

When authorities located the car used in the abduction, the rear window had been kicked out. Indeed, a witness to the kidnapping told police that Carlesha kicked out some of the car's windows before it sped away. Her glasses and cell phone were found at the site of the abduction, along with a pile of broken auto glass. That gave law enforcement something to look for — a car with the windows broken out. That was a clue that led to her eventual rescue.

There's a survival principle at work here. Fight for your life, and be creative in the ways you can attract attention to your plight. In my book, The Ultimate Survival Manual, I include this piece of advice:

To signal other drivers that you’ve been abducted and are in the trunk of a car, defeat the taillights altogether or use them to send an SOS. To gain access to the taillights, you might have to remove or break through a lightweight panel. Once through the panel you’ll probably be able to see the light operating. Find the wiring harness. Best solution is to cut one of the wires and strip back the insulation so you can alternately make and break contact to make the light flash. Dit, dit, dit, dah, dah, dah, dit, dit, dit for SOS.

Do whatever it takes, but by all means never give up. Fight as if your life depends on it — because it probably does.
Posted by Rich Johnson: at 9:43 AM No comments: