When disaster strikes, grocery stores might not be open or stocked with food. That's why it's so important to have your own emergency food storage system. In an earlier post, I mentioned storing up food supplies in your home, and also talked about marking each container of food with the date of purchase so you can use the oldest stuff first and constantly keep the supply fresh. The older it gets, the more likely it is to spoil, so you need to keep an eye on the condition of the supply.

With all foods, it's a good idea to do a "sniff test" when the container is first opened, even if that item came directly from the grocery store (because you have no idea how long it has been on their shelves). If the food smells bad, get rid of it. Don't take a chance on eating marginal food. With canned goods, a telltale sign that the food has gone bad is that the can will bloat as the putrid gas inside expands. 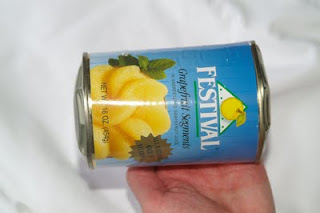 If you see a can like this (even if it isn't this bad, but has a little bit of expansion), get rid of it and then closely inspect all the rest of the supply of similar items. A good can will have a slightly depressed lid, not one that is lifted at all. If you can press down on the lid and make the can "talk" to you, don't use it. The lid should be tight as a drum, but make no drumming sound.

Food that comes from bulging or rusted cans is  considered to be unsafe for consumption.

One of the things that might cause food to spoil in a can is if the metal has been dented. If the dent occurs along a seam in the side, or where the lid and the side of the can join, a breach might take place that will allow air to enter and mix with the contents. When that happens, microorganisms can grow, potentially resulting in botulism.

Food poisoning derived from canned goods is generally caused by bacteria that can knock you down in a hurry with nausea, vomiting, abdominal cramps and diarrhea,  that will leave you weak and dehydrated. In the U.S. alone, the DCD estimates that food poisoning causes about 76-million illnesses each year, putting 325,000 in the hospital, and causing 5,000 deaths.
Posted by Rich Johnson: at 12:25 PM