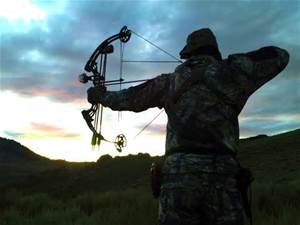 John Sain was alone, bow hunting for elk in a remote wilderness of central Idaho when his foot slipped between two downed trees and he fell, breaking his lower leg.

In Sain's case, the fact that he was alone, with no cell phone or any other means of communication with the outside world, miles from nowhere, and with a badly broken leg almost brought him to the point of ending his own life.

For four days, Sain crawled painfully toward a trail where he hoped someone would find him. But eventually, he got to the point that he almost gave up hope. "It's just the bottom line," he said. "Do I want to suffer or do I just want to get it done with. And at one point, I was reaching for my pistol, asking the Lord for forgiveness."

After thinking about it, Sain gave up on the idea of suicide. Instead, he fashioned a splint out of sticks and strips of ripped cloth. He had a little food, a water filter, and a small survival kit, so he was able to build a fire each night to stay warm.

Each day, he crawled, dragging his mangled leg behind him. On the second day, after crawling three miles, he reached a trail. He scrawled the word "Help" in the dirt, and hoped someone would come along and find him. As luck would have it, some motorcyclists took a wrong turn and ended up on the trail where John Sain lay in agony. One of the riders used a cell phone to call for help, then cut down some trees so a rescue helicopter would be able to land nearby.

Sain ended up in the hospital, where he was treated for hypothermia and dehydration — the conditions commonly listed as "exposure" that kill most casualties of outdoor accidents.

When asked, Sain said that he will hunt alone again, but next time he will take a satellite phone or GPS tracking device so he can call for help if necessary.

Those devices are good to carry, but what if the accident were to render him unconscious so he couldn't use the satellite phone or even press the rescue button on the GPS locator beacon? Here's my advice:

Posted by Rich Johnson: at 6:50 AM No comments: