In my book, the word Hero is overused by the media and by people in general.

For example, I don't consider it heroic just because you were a casualty of war — you got injured, you got a purple heart, so you're a hero? You got captured by the enemy and later released — does that make you a hero? No, I don't accept that. It might mean that you were unlucky or maybe even stupid, but it doesn't automatically elevate you to hero status. It takes more than that to become a hero.

Now, if you willingly make a decision that puts you in extraordinary risk — you go out on a limb to save someone else — whether or not you get injured, captured, or killed, you're a hero. My definition. Your mileage may vary.

Vanbuskirk had been on the search and rescue team for 6 years and had performed dozens of rescues similar to the one that killed him.

It was a helicopter rescue of a lone stranded hiker who was perched on a rocky ledge. The man had hiked into a restricted area where there were signs warning hikers to stay out or face fines. He managed to get himself stuck on the craggy cliff. At this point in the investigation, it's unclear how the stranded man contacted authorities, but somehow he did and Vanbuskirk's team responded.

After being lowered from the helicopter, Vanbuskirk attached a harness to the stranded man then signaled to hoist them both up. Somehow, Vanbuskirk became detached from the line in midair and fell to his death. The hiker was safely rescued.

David Vanbuskirk made a conscious decision to engage in a risky attempt to save the life of another person. In my book, he was a hero even if it hadn't cost his life. All those times before when he put himself in danger to save other people — that's what made him, and those like him, a hero.

Unfortunately, sometimes heros end up losing their life while trying to save someone else. This was one of those times.

While I take this opportunity to honor the life of David Vanbuskirk, let me emphasize the fact that when you get yourself in trouble and need the help of search and rescue personnel, you put their lives in danger. Sometimes that happens quite innocently, and the SAR folks are willing to help pull you out of the situation. But if you do something stupid, like hiking into places that are posted to keep you out, then you deserve to feel the weight of your decision. You bear some moral responsibility. 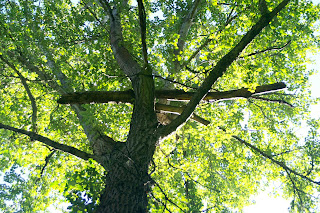 They call these things widowmakers for a reason — they can be deadly, if you're in the wrong place at the wrong time.

Unfortunately, 21-year-old Annais Rittenberg happened to be in the wrong place at the wrong time when a widow maker did it's deadly work. In this case, it was a large branch of an old oak tree that broke free and fell 32 feet to the exact spot where Rittenberg was eating breakfast in camp at Yosemite National Park.

While they are relatively rare, when widow makers fall they are equal opportunity killers that don't discriminate. Anyone who happens to be in the path will become a victim.

In fact, widow makers lead the list of my Top Twelve things to watch for when selecting a campsite. Here's the list:

• Before establishing your camp, look up to check for widow makers — dead limbs in the trees overhead that might fall on your camp, causing injury or damage.

• Look for level ground without rocks, roots or stumps protruding from the earth.

• Find a spot with some ground cover, so the dust from just walking around doesn’t create a problem.

• If you are depending upon a local source of water that you will filter, or otherwise purify for use in camp, locate your campsite within convenient reach of the water.

• Likewise, if you are collecting deadfall for firewood, position your camp near enough to the wood supply that it won’t be too difficult to haul the wood to your camp.

• To keep the wind from whistling through your camp, use the lay of the land or natural resources (boulders, downed trees, etc.) to serve as windbreaks.

• For natural climate control, position your camp to take advantage of the early morning sun and afternoon shade.

• Make sure the site is not in a natural drainage that will funnel rainwater toward your camp. Also, make sure you are not camping in a place that can be suddenly inundated by a flashflood caused by a storm miles away.

• Avoid spots where there are standing puddles of water, because that will promote mosquitoes, a foul smell, and a messy campsite.

• Check the area for evidence of obnoxious insects. Look for wasp nests, anthills, etc. Some wasps nest in the ground, some in trees or other structures. Observe the area for a few minutes to see if there is insect activity.

• Inspect the area for signs of burrowing animals. The dens of these animals can be dangerous foot traps, causing injury to anyone who steps into one.
Posted by Rich Johnson: at 7:58 PM 1 comment:

What happens if a search & rescue team has to come and pull your tail feathers out of the fire? Well, the answer to that question depends on circumstances.

The truth is that, if you are in trouble, those dedicated individuals who join search & rescue teams and spend years getting trained and practicing their techniques, will make every effort to save you.

To do so, they risk their own lives. They risk personal injury. They spend their own valuable time and money — time and money they might spend going to the beach, a ballgame, or enjoying a BBQ in the backyard with friends and family. Instead, they leave their other pursuits to come to your rescue, often spending miserable days and nights trudging through the backcountry, sleeping on the ground, suffering blisters, hypothermia, sunburn, puncture wounds, and worse.

That's right, there's nothing special about search & rescue team members that prevent them from suffering injuries, illness, exhaustion, dehydration, or any other maladies that befall humans who are spending extensive time in rugged conditions outdoors. They suffer just like you do. And they're willing to do it to save individuals who are in trouble.

The difference is that these folks are trained and prepared, whereas you … if you're the lost victim they're searching for … probably are not trained or prepared. Or maybe you're just stupid.

I accept that some folks end up in bad circumstances totally by accident, but probably 90%+ of those "accidents" could be prevented by proper training and preparation, and then applying a healthy dose of situational awareness. But most of the time we run around with our head where the sun doesn't shine, or we do something purely stupid.

Case in point: In an earlier post, dated April 8, 2013, I reported in a "day hike syndrome" incident involving a couple of young people named Nicholas Cendoya and Kyndall Jack who disappeared during an Easter Sunday hike on a popular Southern California trail.

During the rescue attempt, 1,900 man-hours and more than $160,000 were invested by search & rescue teams in the effort to find these individuals. And one of the search team volunteers took a fall and suffered a severe back injury that required $350,000 of medical intervention, including surgery.

It was a bizarre case, with both of the subjects of the search discovered badly dehydrated, shoeless and separated from each other. Those circumstances raised questions about what really happened out there in the canyon. Were these two the victims of abduction by drug smugglers? Were they kidnapped, their shoes taken, and then deposited in separate parts of the canyon?

Turns out that this might be a case of the victims being stupid. Perhaps "drug stupid." Evidence for that conclusion is the recently revealed fact that sheriff deputies discovered nearly 500 milligrams of meth in Cendoya's car while the teenagers were still lost. (There's a reason they call this stuff Dope — 'cause you're a dope if you use it.) And now the Orange County Fire Authority, and the injured SAR volunteer, are suing Cendoya and Jack to recover the costs incurred by the search. Not only that, but Cendoya is facing criminal charges that might land him in prison.

So, the question is, did these two go into the canyon to do some dope, get themselves mentally trashed, and then go off and lose their shoes and their way, and each other? Kinda looks that way now.

And back to my original question — what happens if you end up being the subject of a search & rescue effort? That all depends on the circumstances, as we can see from this case. If it's a legitimate incident, you probably will be welcomed back into civilization by all your friends and relatives, and the SAR team members who found you will feel happy about the outcome.

But if you're a dope, you might end up getting what you deserve — a huge fine, and those welcoming you into their open arms might be wearing prison uniforms.