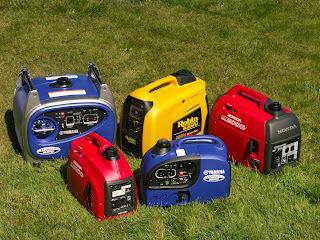 As winter approaches, we can assume there will be power outages in some parts of the country.

One way to survive a power outage is to use a portable power generator to supply electricity to a few things that you don’t want to do without — like the refrigerator, for example — or a small space heater, or some lights.

Two questions that naturally arise when discussing portable power generators are — number 1, what’s portable; and number 2, how much power is enough?

To answer the first question, let me say that what’s portable to me might not be portable to my wife. So that’s a question only you can answer for yourself.

With a few exceptions, heavier generators produce more power than lighter-weight unit. And the simple truth is that no matter how lightweight and portable the smaller units are, if they don’t generate sufficient power to meet your needs, they won’t work for you.

So, how much power is enough? There are two ways to arrive at an answer to that question because there are two different types of electrical loads. The simplest is a running (resistive) load for things like light bulbs, toaster, coffee maker, radio, etc. But appliances that involve an electric motor or compressor (refrigerators, for example) impose what is called a starting load that can nearly double the resistive load. For example, a fan with a 1/8-horsepower electric motor draws 300 watts while running, but to get the fan started requires 500 watts.

To figure out how much generator power you need, add up the “running loads” of all the appliances you intend to operate at the same time. Then do the same thing with the “starting loads” for appliances that fall into that category. Now it becomes a juggling act. With a small generator, you might discover that it is necessary to turn off some appliances in order to operate others.

Many appliances are rated in amps, but generators are rated in watts. To convert amps to watts, multiply the volts times the amps. For example, if the appliance draws 10 amps, multiply that times 120 volts and you come up with 1200 watts. The important thing to remember is that the combined wattage of all the appliances you are operating at any given time needs to be lower than the generator’s rated output. Keep in mind that generators are rated with two levels of output — Maximum Output and Rated Output. You want to be working at or below the Rated Output level. Max Output is a number that represents the absolute peak power that the unit is capable of delivering, but it is not a level that can be sustained over a long period of time.

To help decide how much power output you need from your portable generator, consider these typical wattage requirements for a variety of 120-volt appliances.

It’s easy to see that a small 50-pound, thousand-watt portable generator won’t even be able to run a simple space heater or toast your bread. So if you’re thinking of getting a generator as part of your urban survival strategy, make sure you get one that will supply enough power for your needs.
Posted by Rich Johnson: at 5:14 PM