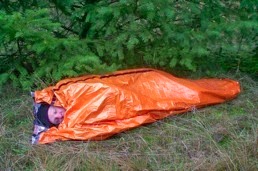 72-year-old Gene Penaflor had no idea, when he and a buddy set off from their hunting camp with full intention to meet up again for lunch, that it would be 18 days before he would see civilization again.

But that’s what happened. Sometime during his hunt, Penaflor slipped and fell on the steep terrain. He hit his head and lost consciousness, and by the time he woke up it was after dark. And he had no idea where he was.

Lucky for him, he did the smart thing — he made a survival camp and stayed where he was for the night. Unlike some who find themselves in a similar situation, Gene Penaflor didn’t give in to the temptation to wander around in the dark, trying to find their way out of a difficult situation. Nope, Penaflor did it right, and that was a good thing because hiking at night can lead to further injuries.

But even so, due to the seriousness of his injuries and the fact that Penaflor had no clue about where he was, there was no way for him to hike out of the forested mountains in a self-rescue attempt. He was stuck there in his makeshift survival camp until he was rescued. And that took 18 days.

An intensive search and rescue operation was initiated, but after 4 days it was eventually called off when Penaflor was not found. At least once during that search, Penaflor spotted a rescue helicopter, but he had no way to signal them.

On the 18th day of his ordeal, another group of hunters stumbled upon Penaflor and carried him out of the forest. He had kept himself alive by eating lizards and snakes, berries and algae. At night he covered himself with leaves to stay warm.

There’s a lesson in all this for us.

By carefully selecting the emergency gear, all of these things can fit in your pockets, so you don’t need to carry a backpack every time you leave camp or go on what you intend to be just a short hike.

The important thing is to be prepared to stay for much longer than you think you’ll be out there.

Just ask Gene Penaflor — he’ll tell you how smart it is to be prepared.
Posted by Rich Johnson: at 10:16 AM