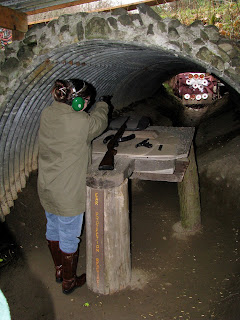 A woman who couldn't figure out how to load the family's shotgun, so she could use it to save her husband who was being mauled by a black bear, decided to beat the bear on the head with the gun.

Not exactly the most effective method of using a firearm for self protection, but it worked.

Here's what happened — the couple and their dog were enjoying a vacation in their Wisconsin cabin when a year-old black bear started chasing the dog. Gerre Ninnemann said, "I came running out into the yard, shouting, waving my arms at the bear, thinking that would scare him away. But it didn't. All it did was leave the dog and come right for me."

Ninnemann ran for the corner of the cabin, but the bear caught up with him and started mauling him. His wife, Marie, found the shotgun but didn't know how to load it. So she took the gun outside and beat the bear on the head, which gave her husband a chance to escape into the cabin. But the bear wasn't done with them. He charged right up to the door, then started circling the cabin and looking in the windows. Ninnemann called the sheriff, who sent a deputy to dispatch the bear.

Ninnemann ended up in the hospital with bites and claw marks from his waist to the top of his head. His wife's quick thinking probably saved his life.

After Ninnemann recovers, I believe a session at the shooting range is in order. If you're going to have guns of any type, it's critical to be well trained in their use. That goes for everyone in the family, because you never know when the defensive use of a firearm will be needed by someone other than the primary gun owner.
Posted by Rich Johnson: at 7:56 AM