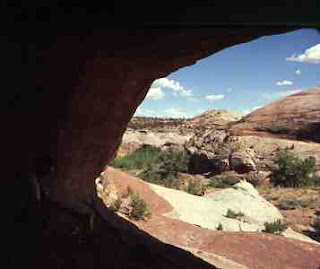 The location posted at the head of the news story caught my eye — Boulder, Utah.

Boulder was the nearest village to our cave (seen here at left) when we spent a year living in the southern Utah wilderness doing primitive survival research. So it was only natural that a flood of memories filled my brain as I read the story of a 28-year-old man from Colorado Springs being lost in that desert for 3 weeks…and barely surviving.

After William LaFever was found by search and rescue teams, sheriffs spokeswoman Becki Bronson had this to say about the region. "It's some of the most rugged, unforgiving terrain you will find anywhere on Earth, jagged cliffs, stone ledges, sandstone, sagebrush, juniper."

This is slickrock country, where breathtaking sandstone cliffs rise hundreds of feet above the desert floor, where intermittent streams and permanent rivers cut through the rock to form deep canyons.


To outsiders, this place appears inhospitable, and yet it is a landscape that supported whole communities of life for thousands of years. This is where the ancient Anasazi lived in cliff dwellings built into caves and beneath rock overhangs.

This is where we spent a year in the wilds, Becky and me and two small children ages 1 and 3. Having lived there, I can attest that it is a land that can kill you quickly, if you fail to respect it. But it is a land that will give you everything you need to live, if you understand it.

The episode related in the news story started when William called his father to say he was hiking in the Boulder area with his dog, and that someone had stolen some of his equipment and he had run out of money. His father told William to catch a ride to Page, AZ where there would be money waiting for him.

But rather than catch a ride, William decided to hike the 90 miles to Page, following the winding path cut by the Escalante River until he reached Lake Powell, then hope to catch a boat to Page.

And, as it turned out, it nearly killed William.

When William failed to show up in Page, as his father expected, a search was initiated. Sheriffs deputies and the Utah Highway Patrol helicopter began searching along the Escalante River. But deputy Ray Gardner said he was not expecting a good outcome. "We had no idea if William had stayed along the river or decided to leave, got a ride with someone, or was lost somewhere other than along the river. We flew without any expectation of finding anything at all."

William had set out along the river and hiked until he ran out of food. His dog abandoned him and was never found. Eventually, William decided to start leaving some of his gear beside the trail, to lighten his load. When he was discovered, All he had was the clothing and shoes he was wearing. He had hiked about 40 miles and was still 5 miles short of reaching Lake Powell. When the helicopter passed over, William was so weak he couldn't stand and was barely able to wave his arms.

Deputy Gardner said, "We were absolutely dumbfounded to learn that it was William and that he was alive. You've seen pictures of starving people from other countries; in all my career I have never seen someone so emaciated. I feel certain that in another 24 hours he would not have been alive."

Lessons for us are clear.


File a hike plan with people you know and trust, and then stick to it. If you decide to change the plan, let those people who have your plan know about the changes.


Prepare yourself with more than sufficient food and a water purification system that will see you though to the end of the expedition. Don't expect Mother Nature to feed and care for you along the way.


If you become lost or disabled, stop and make camp, then activate signaling strategies to help searchers locate you.


Employ good survival technique to protect your core temperature, your energy and hydration.

To me, the desert around Boulder, Utah is a fantastic place. The scenery is straight out of a postcard, and the isolation is profound. It is one of my favorite places on Earth. It invites adventure seekers to come and explore. But it also demands respect, good judgment, and skill if you want to go there and come out alive.
Posted by Rich Johnson: at 11:08 AM