We had an up-close-and-personal incident involving quicksand on the first day of our year-long wilderness living experience in southern Utah back in 1976. That was a long time ago, but I've never forgotten how tricky it can be to deal with this stuff.

And this past week, another fellow learned a similar lesson. It happened to a 25-year-old man who was involved with the National Outdoor Leadership School (NOLS), famous for their excellent outdoor education programs.

After 23 days trekking around southern Utah, he apparently stepped in the wrong place along the Dirty Devil River and became trapped by a pool of quicksand. He was there for 8 hours before a search and rescue squad was able to get him out. The first attempts at rescue failed, and it was 2:00 a.m. before they finally fished him out of the quicksand.

The guy was lucky, to say the least. But he was also prepared, and that takes some of the luck out of it. The way the authorities found out about his dire situation was because he used a PLB (personal locator beacon) to trigger the rescue effort. The PLB sent a signal to a satellite system that relayed the distress signal to the rescue agency.

After our own encounter with quicksand on our approach to the first cave we lived in, I talked with a local rancher about what happened. "Yeah," he said without a hint of surprise on his face, "we lose cattle to the quicksand all the time down that canyon." 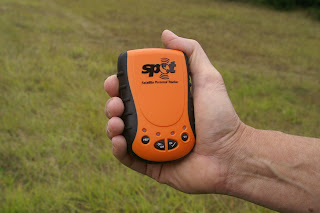 Back in that day, there was no such thing as a PLB. Today, there's no excuse for wandering in the wilderness without the ability to alert rescue teams if you get in trouble. I understand perfectly how that concept offends "purist" wilderness explorers who think it somehow diminishes the experience if you are still tied to civilization via a satellite link. Be that as it may, the older (and wiser) I get, the longer I want to live so I can keep exploring the world. A PLB is cheap insurance. I carry a SPOT (www.findmespot.com), but there are other products available.
Posted by Rich Johnson: at 7:41 AM