Anyone who ventures into the outdoors needs to know the rules of survival in snake country. Venomous snakes are found in all but a few isolated places in North America, and chances are good that if you wander around the backcountry long enough, you'll encounter venomous snakes.

The good news is that rattlesnakes are not out to get you. You don't need to worry about a snake hunting you down. In fact, the opposite is true … generally, snakes try to avoid people unless molested, cornered or otherwise threatened. However, there are occasional accidents where man and snake encounter each other with unfortunate results. 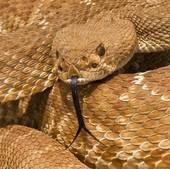